Last season's campaign saw Athletic Club qualify for the Champions League for the first time since the 1998/99 season. They will have to qualify via the play off draw after finishing fourth, where they have been drawn against Rafa Benitez's side Napoli. If they can get past Napoli it will be a fantastic start to the season as they look to continue last season's good form into the new campaign. 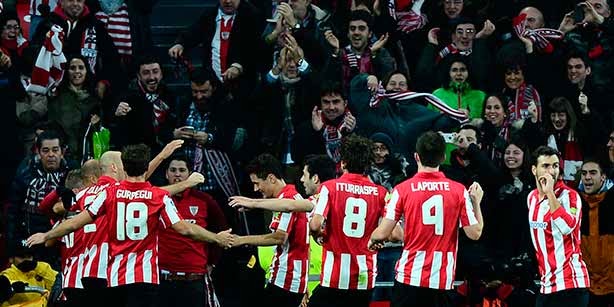 There was a whole lot of changes last summer at Athletic Club. Ernesto Valverde was the man brought in to replace Marcelo Bielsa. There was a lot of excitement surrounding this news as Ernesto was a manager with a lot of experience managing in La Liga and he was presented with the challenge to revitalise the squad which was worn out under Bielsa. It was also the clubs first season in their new stadium. The San Mames Barria wasn't ready for the start of the season as Athletic had to start their campaign at Rival's Real Sociedad's stadium The Anoeta. Athletic had a great home campaign at the new San Mames, winning 13 of their home games including their brilliant 1-0 win over FC Barcelona. Athletic's home form was one of the biggest factors in them qualifying for the champions league. They confirmed their spot in next year's competition after beating Rayo 3-0 at the start of May.

They will have to begin the new season without their star man Ander Herrea. The 25 year old midfielder signed for Manchester United after the club payed his release clause. The club won't have to look to far to replace Herrea as they will be hoping Benat can step up to fill the role. They was a lot of stand out performers for Bilbao last year. Aritz Aduriz finished as the top goal scorer for the second year running after netting 16 goals last season. Ibai Gomez and Aymeric Laporte both had excellent campaigns and new signing Mikel Rico was a fan favourite with his energetic approach to the game. Athletic have looked to bolster their forwards options this year with the purchase of Borja Viguera from Deportivo Alaves. The forward has similar traits to Aduriz and he netted 25 goals in the Liga Adelante last year.

It is going to be a difficult campaign for Athletic this year. The addition of Champions League football ( if they get past Napoli) will prove a great challenge to the clubs small squad. The competition for fourth this season is tougher then ever with the investment that both Valencia and Sevilla have made. Bilbao will be hoping that their current stars can produce the same type of performances both in Europe and their domestic games and they will also be looking at some of their younger players to step up and break into the first team, including forward Guillermo and highly rated midfielder Unai Lopez and with the stadium near full completion, expect an even more incredible atmosphere on match day. A good Champions League campaign would be brilliant for the club but it could holster their progress in La Liga. Prediction: 5th.
Posted by Unknown at 06:29 1 comment: 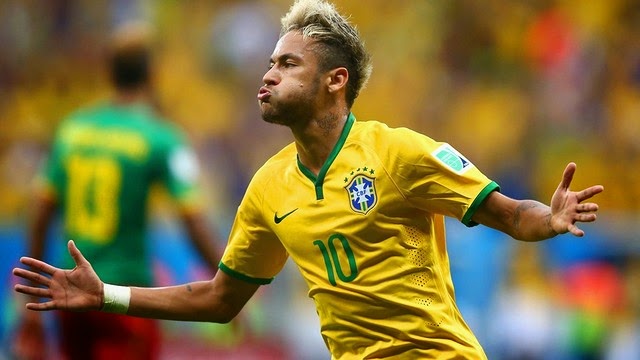 The first round of 16 fixture of this years World Cup will see the host's nation Brazil take on Chile in Belo Horizonte.


Both teams will come into this fixture on good form after comfortably progressing through their tough groups. The high expectation on Brazil has lead to them coming under some criticism for their performances especially in the opening game vs Croatia, that criticism was eased after their 4-1 win against Cameroon and with top goal scorer Neymar leading the attack, Brazil will be very confident of getting the win.
Chile on the other hand have been the surprise package with very few people expecting them to progress in a group which contained both of the 2010 World Cup finalist's. They were extremely impressive in their group, especially vs Spain and was credited for their high work rate and fearless attitude.

Team News
Brazil may look to make a couple of changes for this fixture. Fernandinho's impressive cameo display vs Cameroon may have been enough for him to start over Tottenham's Paulinho. Ramires maybe deployed on the right hand side of midfield instead of Hulk to try and break down the flowing attacks of Chile.
Chile made very few changes in their 3 group matches and are expected to name the same line up vs Brazil and will be hoping that Gary Medel will pass a late fitness test.

Key Men
Brazil will be hoping that Neymar can continue his impressive World Cup form which has seen him become the joint top goal scorer with 4 goals, tied with Barcelona team-mate Leo Messi. Chile will place their faith in Barcelona's new goalkeeper Claudio Bravo and if he can produce a performance similar to the one by Mexican goalkeeper Ochoa vs Brazil, then chile will stand a great chance of progressing to the quarter finals.


It will be a difficult game for both sides but I feel Brazil have more individual quality then Chile and if this player produce then I can't look past a brazil win. Brazil to win 2-1.
Posted by Unknown at 15:37 No comments: 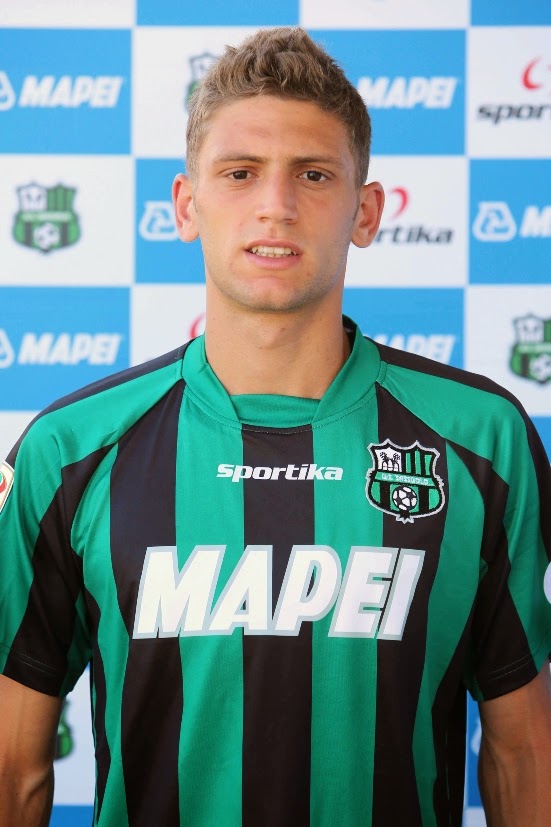 It's been an outstanding break-though season for Domenico Berardi in the Serie A this year. The forward on loan from Juventus has been one of the surprise stars in the league and has caught the eye of many clubs including English giants Manchester United.

Who is Domenico Berardi?
Domenico started his career at his local club Cosenza. He was at the academy for 3 years before moving on. At the beginning of the 2012/13 season he signed for Serie B team Sassuolo and made a huge impact, notching up 11 goals as he helped his side win the league and gained promotion to the Serie A. After seeing his impressive performances in the league, 30 times Serie A winners Juventus agreed a deal to sign the youngster and loan him back to Sassuolo for the 2013/14 season. It has been a terrific season for him, scoring 16 goals despite the teams struggles. The young forward also made history this year becoming the first ever player to score four goals in a single game against AC Milan.

Playing Style:
With his height, pace and equal ability in both feet, he has attributes to be a solid centre forward. He has been used in a few different systems this season but he has been mostly used on the right hand side being encouraged to cut onto his strong left foot. Luciano Carlino the assistant youth coach at Sassuolo spoke to tuttosport and described Berardi as a player who ''has a left foot capable of lethality from any position, his light touch and ability to cut in with pace, he reminds me of Arjen Robben''. Despite being at such a young stage of his career, Domenic doesn't have many weaknesses in his game, but an area of his game where he may look to improve on is his discipline. He has struggled with this and has been awarded with ten yellows and a red card after just 48 seconds on the pitch for throwing an elbow at Parma opponent Cristian Molinaro.

Why you should follow him:
Domenico is a very exciting young player to watch, (He has already scored 3 hat-tricks this season). He is a player who has adapted to life in the serie A very comfortably and with him heading back to the 2013/14 league champions Juventus next season, we should be seeing him competing for titles and playing amongst Europe's elite in the Champions League next season. 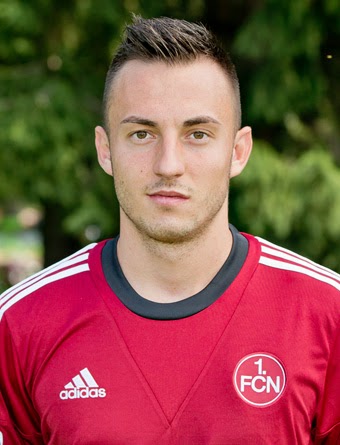 The 21 year Swiss forward has burst onto the European scene this season after his terrific start to life at FC Nurnburg. He has been one of the most talked about youngsters in the top flight divisions and has already caught the eye of Arsenal manager Arsene Wenger. Although there are rumours that he is about join fellow Bundesliga Club Bayer 04 Leverkusen.

Who is Josip Drmic?
Josip begin his career at FC Zurich II ( The B team of FC Zurich). In his first two season's he scored a staggering 26 goals in 26 appearances and was immediately promoted to the first team. The 2012/13 campaign was his best at the club where he ended the season with 19 goals in 39 matches. This caught the eye of many clubs and he was snapped up by FC Nurnburg on a four year deal and has made a superb start to his career at the top flight club.

Playing Style:
Josip has been predominately played as a centre forward but can also be played on the right-wing. With him being quite a pacey forward, he is always looking to break the line of defence and is very confident in finishing with either foot. His sublime ball control and great composure and in front of goal means he is very effective in playing as a lone centre forward. Despite his height a weakness of his game is his ariel ability. He hasn't scored many headed goals and has won just 31% of his ariel challenges.

Why you should you follow him:
After his interest from top clubs such as Arsenal and Bayer Leverkusen, it's clear that Drmic could be heading to an elite club soon and we may even see him in the champions league. Even more so due to a clause in his contract. Despite his impressive amount of goals in the league this season (only Robert Lewandowski and Mario Mandzukic has scored more this season) his club still find themselves in a relegation battle and Josip can be bought for a bargain £4.5 million if the club does go down. He has also represented his country across all levels and is currently playing for the National squad, with Switzerland qualified for the world cup we may also see him playing amongst the worlds best in Brazil this summer.

Have a look at Drmic's goals on the video below